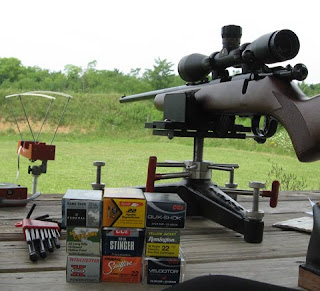 I've owned a Savage Arms Mark II GXPB for about 14 months- no AcuTrigger.  I purchased it as a tool to add to my preparations.  I wanted a rifle to shoot varmints and for hunting rabbits and the like.  I was looking for something cheap and accurate.  I knew I wanted a scope on it.  I also wanted a .22 vs. a .223 for varmints due to the shooting characteristics and cartridge prices of .22 cal firearms.  I also have children; so having a light-powered (and quiet) firearm for them to train with was ideal.  I also wanted bolt action- generally better accuracy and better ammo conservation.
I picked up my Savage at Dick's Sporting Goods.  It was on sale for $130 including the scope.  I purchased an extra 10 round magazine at the same time.

Upon inspection at the store, I was impressed with the smart and crisp bolt action movement.  It was also a full-size rifle vs.. a youth model- that was a bonus considering I'm a fairly tall man.  There were sling points already on the stock and that made me happy.
I took the .22 home and broke it down.  Everything was clean (of course), but it was good to see all the parts laid out.  The machining appeared fairly good.  There were no rough edges or burs that needed attention.
After putting it all back together, I took it out to the range to zero it in.  The scope was supposedly bore sighted- it wasn't.  No big deal, but it took a few rounds to get me on paper at 50 yards.  After zeroing, it shoots a consistent pattern about at 3/4". Not going to win any contests with this one- but it will do the job.  I call this one my nail driver.  I've gotten even better with this rifle and after breaking it in (500 rounds) it will shoot within 1/2-1/4 inch patterns.
I tried a number of different rounds through it to see how it performed.  Hollow point XPert HV Winchester caused several misfeeds (3 out of 250 shots);  I suspected that the short stubby bullet would not feed nicely- and I was right (this can be remedied by buffing the ramp with a dremmel tool).  Also, the ejector did not function properly on a few rounds.  I had to remove the magazine and work the bolt hard several times before it would eject.  I understand this is common in this rifle and a new ejector may be needed.  The Winchester copper plated rounds loaded and shot the best for me.  No ejection problems with those- that will be my ammo of choice.

On the negatives, this rifle does not have iron sights.  This is a real negative from a survival aspect.  If the scope fails, then I have no way to aim it.  My options are to get a spare scope (I did) or to get iron sights put on by a gun smith (cost prohibitive at $300). This is something you will have to weigh in when considering this gun.  I would do it again- simply b/c of the great price.
Be careful when cleaning it- there is a port on the left side that will leak solvent onto the wood finish if your not careful.
In all, I recommend this rifle if you can find a good deal on it like I did.  It shoots straight and is reliable (once you find the right ammo for it).  It does not have sights- but this can be overcome with a little more $.  It is a good looking firearm- very rugged- but not overly heavy- especially when you put a sling on it.

BTW, if you're into prepping for emergencies, I highly recommend shopping at www.internetprepper.com for emergency water filters, grain mills, canned and dehydrated food.  The prices are among the cheapest on the web (when you consider shipping) and the owner is a USAF veteran.
In The News:
FDIC, Hit by Failing Banks, May Sink Into the Red
LIVESHOTS: U.S. Hospitals Save Canadians' Lives
Quote of the Day:
Guard against the impostures of pretended patriotism.

Hey thanks, this post just made me pull the trigger on purchasing the Mark II Thanks a ton!