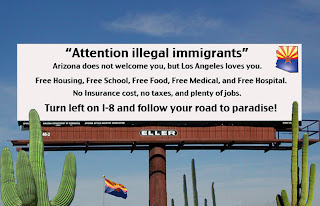 First, Austin TX is boycotting Arizona due to the immigrant law.  This hits home with me as my brother in law lost a contract with the city over their boycott.  I’ve read the law (it’s only a few pages) and found nothing wrong.  I am boycotting Austin- not sure yet what it actually produces, but I’m definitely not going there on vacation. I’m dis

Second, the Gulf oil fiasco. Politicians and the media are using this event as a reason to INCREASE government regulation, forgetting that it was government regulation in the first place that led to the accident.  Government regulations forced BP to drill in the gulf.  Do you really think that drilling for oil 1 mile deep in the gulf was their first choice?  No, oil companies are no longer allowed to drill on soil, so they had to move off shore.  How much easier do you think it would have been to drill on solid ground and not have an accident- and if you did how much easier would it be to clean it up?  Less regulation is the answer to prevent future spills- let the oil companies drill on land!

Lastly, every day I read the news I become more distraught with the state of the union.  I feel that the government and people have radically departed from the original intents of the founding fathers.  I remember when I was in police academy in Arizona that I was warned about radical groups that carry around copies of the constitution.  Well, guess what I have in my back pocket as I write this… am I now a radical?  I don’t feel like one.  I want to follow the law, it’s the government that doesn’t.

"You need only reflect that one of the best ways to get yourself a reputation as a dangerous citizen these days
is to go about repeating the very phrases which our  founding fathers used in the great struggle for independence."
--Charles Austin Beard (1874-1948)