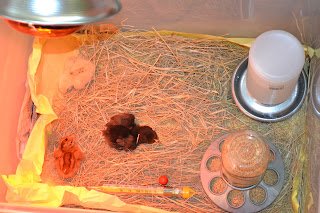 My neighborhood egg man (who I've made pretty good friends with) gave my daughters three chicks for Easter today.  They are hens (I'll explain how he sexed them later).  We prepared for their, arrival by getting a plastic tote, a feeder, a waterer, a heat lamp, (needs to be kept at 100 degrees the first week, and then 2 degrees cooler each week until they go outside at about 4 weeks old), and some medicated chicken starter (I know it's controversial, but we decided to medicate.)

Another friend loaned me a chicken tractor till I can build my own (we won't need it for at least a month though).  Mostly, I borrowed it so I can see if chicken raising is right for us without the commitment of building a chicken tractor. 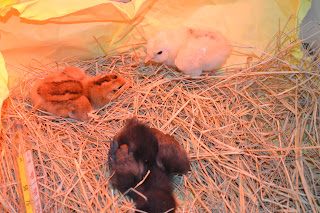 The chickens are any particular breed- just barnyard chickens from mothers that obviously lay eggs.  We've been eating these eggs for a few months now and really like them.

I expect that these chickens will start laying by the end of summer.  We figured if they each lay about 300 eggs per year, that's 900 eggs.  We pay a little less than $.25/egg. My math is not usually the best, but my calculator says that's $225 worth of eggs. About a third of that will be feed.  So, I'll pay $75 to get over $200 worth of eggs.  But the real value is in the experience in raising them and having my kids learn right along with me. 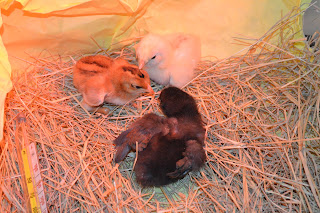 The egg man sexed them by first lifting them up and checking between their legs.  Then he checked feathers- females have an extra row at birth under their wings.  Then finally, just to show off, he pulled out a string with a nut tied at the end.  He hung the string over the backs of the chicks while he held them in the other hand.  If the nut swung in a circle, it was a girl; straight back and forth, it was a rooster.  :)

BTW, this is the chicken tractor I want to build. 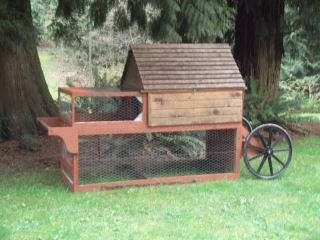 I picked up 21 vintage Onida Victor traps today.  Size 0-2 assorted.  As best as I can figure, these work just fine (I tested several).  All but two are long spring variety and two are coil spring.  Lightly rusted.  Apparently they were hanging as decoration in a cabin in Colorado for years. 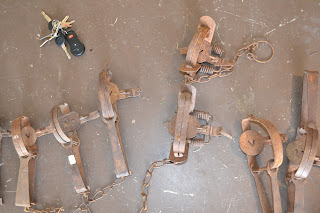 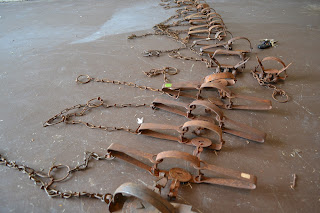 I did find a tuft of fur in one of them (so I know they were actually used at one point). The prices for these typically range from ~$10 up to $18.  So, figure minimum is around $250.  I paid $75!!  Yeah.  I want to try these out and trap some coyotes in the area.  (For Texas, as long as you have a hunting license and are hunting for a non-fur bearer (like coyote) then you can trap them year-round :).

These could come in handy some day.
at 3:55 PM No comments: Links to this post