The Day After the Dollar Crashes

What has America Become? 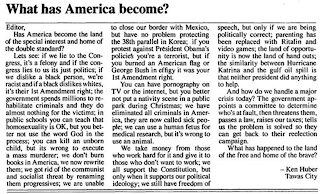 In April, 2010, US Treasure Secretary Geithner said that they (the members of World Bank) had altered the shareholding formula and decided to re-capitalize the bank by issuing more bonds. (http://www.reuters.com/article/idUSWEQOO390120100425 )


He also said that the United States, which holds the largest voting share in the World Bank at 16.4 percent, would not seek any increase for itself under a revised voting formula that is to better reflect developing countries' economic heft.

"Because we believe this overall outcome merits our strong endorsement, the United States agreed not to take up its full shareholding in this new arrangement," Geithner said. (http://www.reuters.com/article/idUSWEQOO390120100425 )

The five Executive Directors are appointed by the members with the five largest numbers of shares (currently the United States, Japan, Germany, France and the United Kingdom).

Just why did the U.S. decide to take less of the votes? To give more voting power to nations that don’t have as big of an interest it. I.e. They get to vote how other people spend their money. Nice.

And just how did the World Bank (the U.S.) decide to recapitalize (get more money into the bank)? They are following McDonald’s and Caterpillar’s (did you know Caterpillar got a HUGE bailout?) lead. Global companies and institutions such as the Asian Development Bank, McDonald's Corp and Caterpillar have all issued yuan bonds. They are already giving up on the dollar. The U.S. government is following suit.

And what does the U.S. not taking it’s votes combined with issuing 500 yuan mean??? It means CHINA will now become the 3rd highest voting member of World Bank, after U.S and Japan. They will leap frog over Germany, France and England. I wonder who is buying those bonds? My bet is on the U.S. treasury- along with McDonald’s and Caterpillar.

What does that mean? It means the Dollar is in demise. It means the Yuan in on the rise and it has the blessing of the US. Why does Obama (he controls Geithner) want the Yuan to succeed and the Dollar to fail??? Why would we give up voting rights to China? Is it a slap in the face to Germany, France and the UK? Or, are they buying the bonds along with the US? Did you know that China just agreed to bail out Spain’s debt? I bet they are buying the debt in yuan. What a great way to promote their currency- they are giving it away!

On 23 November 2010, at a meeting of the Russian Prime Minister Vladimir Putin and the Chinese Premier Wen Jiabao, it was announced that Russia and China have decided to use their own national currencies for bilateral trade, instead of the U.S. dollar.

The evidence indicating that our government believes that the dollar is done for and they are getting ready to jump ship. They are diversifying into the new world currency- the Yuan. Curious that our socialist president is moving toward a socialist currency. Did you know Mao’s face is on the 1, 5,10, 20, 50, and 100 yuan note?

Chinese takeout anyone? I’m hungry.
at 9:08 AM 2 comments: Links to this post

Selling a Surivival Library on Disk

I have organized my files and have well over a hundred books/magazines/articles on survival and survival related things.  I've posted a few ads on Craigslist and Backpage.com.  I've had a decent response.  I'm asking $10 for the disk- including shipping.  I tell everyone that these are files that they can find online for free- but that they will have to hunt and sift through all the junk before they find these gems.  The $10 is for the service of finding and sending them the disk- not the content.

For $10 you really can't go wrong- it's downloaded, organized, and burned.  The only thing better is to take the disk down to kinkos and have them print it out and bind it for you.  Most of my files are in my download section in the hyperlink to the left (I'll leave that there for now) but, I've got a bunch more that I won't post online- due to copyright infringment.

If anyone is interested, send me $10 via paypal and I'll drop it in the mail the next day- you'll be glad you did.

Thanks.   Prepareyourfamily@gmail.com
at 6:44 PM No comments: Links to this post