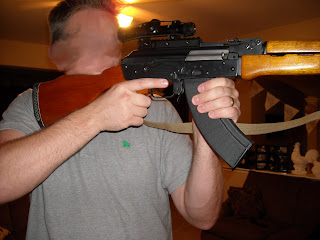 It turns out, your not supposed to shoot an AK like an M-16/15/4.  What?  Yeah, all this time you were supposed to be holding the area shown above, somewhere between the magazine and the receiver.  It makes a lot of sense once you try it.  Better balance, grip, easier reloading, don't have to worry about magazine falling out... Besides, this is how the pros will teach you.  **Note my finger is straight along the frame.  Never put your finger on the trigger until you are ready and willing to fire what your aiming at.  I see way too many yahoos at the range (including military and police) with their fingers on the triggers way before it should be.  That's just asking for trouble. 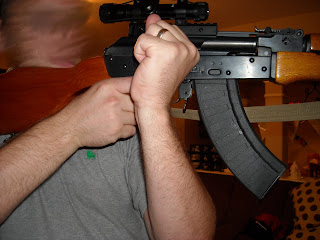 Here I'm demonstrating one of the many ways (probably the best) to charge/reload your AK variant.  Many people go OVER the gun with the left hand this is cumbersome to me and plus, with my scope there, it's dang near impossible.  Plus, it could block your field of view and just looks wrong IMHO (below).

Taking your right hand off to charge is a possibility, but then you have to transition back, which will slow you down in a firefight.  Remember to slap your bolt back hard and let the spring bring it forward.  Don't ride the slide back.  This is true with auto pistols as well.  (another day)

I'm sure I'm going to get several ppl tell me that my technique is wrong.  But, truth be told there are many ways to fry an egg.  You need to practice with all of them and use the one for the right situation.  When I went through firearms training (16 week course), we practiced one handed reloading, one handed firing, firing with your weak hand, firing prone, firing on your back, firing from a vehicle, firing at a moving target, firing while being a moving target... you get the idea.  I didn't use weaver stance for hardly any of those situations and neither should you.  The techniques demonstrated above are ideal and should suit most AK-47 users just well.
(BTW, the firearm above is a MAK-90 sporter made by Norinco with a Chinese scope mounted on a NcStar dust cover and a Czech plastic magazine.)


Quote of the Day:

I now believe that there is no "right" way to hold the gun. I think it depends on the situation.

You may find better stability for long range shots by holding the foregrip or anywhere in between.

Same goes for just about any gun. There is no right way or wrong way- it just depends on the situation.