Book Review: EMERGENCY This Book Will Save Your Life by Neil Strauss 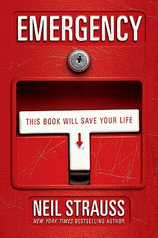 Two weeks ago when I was in the Dallas airport, I stopped at Hudson Books and picked out a survival-type book whose cover caught my interest.  Entitled "EMERGENCY THIS BOOK WILL SAVE YOUR LIFE" by Neil Strauss, the book looks like a fire alarm pull.
The book is a biography, or rather, the story of how the author became interested in preparing for survival and his journey along the way.  Neil chronicles all the survival courses he took and his activities that bring him closer to his ideal of preparedness.
Initially, the author believes that getting a second citizenship is necessary to prepare.  He attends a seminar in Mexico that purported to help him achieve just that.  Later, he signs up for knife fighting classes as well as tracking, shooting, EMT and other classes he believes will prepare him for disaster.  The book is quick to read, but really has little in the way of practical information for the prepper.  He seems more interested in proving his story is true by including photocopies of his CPR certificate and lawyer bills.
He did take an interesting course- many of his courses I had no idea existed- called urban evasion.  The culmination of the course required him to go around the city on a scavenger hunt without getting caught by the instructor team.  I don't think any of those skills would truly help in the event of a social collapse- but it was interesting to read about his cross-dressing costume none-the-less.
To bring his book to a close, he comes full circle in philosophy.  Instead of running away from danger, he believes that he should be running straight into it- to help others.  He now works as an EMT and on the local (California) search and rescue team where he feels he is making a difference.
I don't recommend this book to any preppers looking for a book to teach you anything; it won't save your life.  There is no good how to instruction in it at all.  The only good aspect about it is that it opened my eyes to the market for survival classes- also, that everyone has a different idea of what preparedness means.
at 7:19 AM