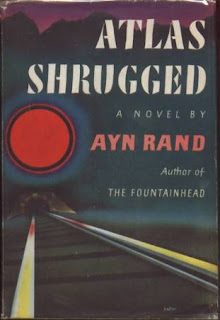 I have been absent from writing anything of substance for the past few weeks.  This is, in part, due to my having to work some night-shifts at work and due to the sad fact that I feel I haven't done anything significant to prepare recently.  Oh, I'm still making bread and all that.  I went and looked at travel trailers this past week as well.  I also started reading Atlas Shrugged, by Ayn Rand. It's really a good book, long and tiresomely detailed.  So much has been already written on this book that I feel any half-hearted attempt on my part in a blog would be an insult to the literary icon.  So, I'll simply repost a short post from Gatsby's Monologue regarding the book (disclaimer- I don't agree with many of the perspectives from the blog author- but this was a good summary of the book).

Since the government sponsored bail-out of a few public companies, most notably in the banking and automotive industries,  a lot of people have been comparing our modern situation with Ayn Rand's classic novel Atlas Shrugged.  If you aren't familiar with the book, it is centered around a core group of characters who are all brilliant industrialists – Dagny Taggert runs a transcontinental railroad, Hank Rearden owns a steel company, Francisco d'Anconia presides over many copper and other metal mines and finally John Galt, well, who is John Galt.  Anyways, the whole premise of the book involves the depth of Capitalism in America, or lack thereof.  Rand, in contention to the term "free market", makes convincing arguments that although business is essentially free to make fluid decisions within some markets, the greedy and parasitic politicians within the government bleed the genius mind to death through taxes and policies.  For example, when Rearden invents a new form of lighter, stronger steel that revolutionizes the world, politicians tax and blackmail him into releasing the patent so that their inept friends who themselves own steel forges will not be driven from the market.  The obvious message in this book is that capitalism must be pure, not adultered with politics or taxation.  Also Rand seems to really slam on communism, although she rarely says so explicitly.  As the novel progresses, the (always, unfailingly) despicable and unqualified politicians manipulate, cheat, steal and basically bastardize their government posts in order to screw over the smart industrialists, basically because the politicians know they are not creative or hard-working enough to succeed through pure capitalism, so they instead use government power to leach from those who are actually successful.

Finally, a quote from the book:  Contradictions do not exist. Whenever you think you are facing a contradiction, check your premises. You will find that one of them is wrong.