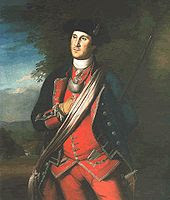 Just finishing up a trip to Sumter, SC where I stopped by two musuems.  One in Camden and one in Sumter.  These are Revolutionary War museums that have old buildings that were moved to the site and also lots of information on the area during that era.  Since my last post was about the Constitution, I figured I’d continue that theme and share some of the information I've learned this past week.
First, some info on the South Carolina state flag that you may not find anywhere else.  Take a look at George Washington there and you’ll notice that he is wearing a “gorget.”  The term dates back to midevil times when a gorget was part of the suit of armor that covered the neck.  Later, the gorget was worn by officers to distinguish themselves from the conscripts or enlisted men.

The American and British officers of the revolutionary war wore these gorgets, including George Washington.  The South Carolina regiments wore the gorget with the inscription “Liberty” or in some cases like Lieutenant Alexander Hume’s of the Second South Carolina Regiment. the face of his was ornamented with the liberty pole, crossed flags and the arms of war above the regiment's motto: "Libertas.Portior.Vita," or "liberty is more important than life".

The crescent you see on the SC flag is a gorget, not a crescent moon.  The palmetto tree is to remember how effective the palmetto was in Colonel Moultrie's defense of Sullivan's Island against an attack by British warships in June, 1776. (That's right, the war started well before we declared our independance on the 4th of July).  Cannonballs fired at the fort from the British ships could not destroy the walls of the fort which were built of Palmetto logs. Instead, the cannonballs simply sank into the soft, tough Palmetto wood.
Secondly, and this is the part my readers will find fascinating, is that after the Aggression of the North (Civil War to you yanks) South Carolina refused to fly the state flag!  Why you ask?  It was a statement of the people, telling the federal government that the state flag had no meaning any more.  They believed that SC freely joined the union and that they should be able to freely leave- the war proved otherwise.  Since SC did not have the liberty to secede, it refused to fly the flag that represented it’s liberty.  Others suggest that they did not want to dishonor the state flag by flying it next to or below the federal flag.  What a slap in the face to those who claim to represent freedom! 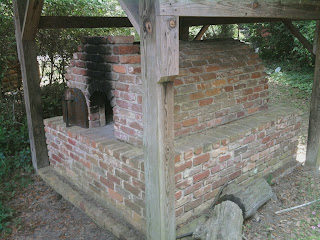 Here's a period bread oven. There is a small vent at the top of the arch in the middle. The door is steel with a handle. Lots of baking room inside. seems like it might have been hard to get a good draft for the fire, but by the looks of the smoke exiting the door I'm not sure how effective the chimney vent is.

During my trip I was able to check out the dwellings of colonial-era people and gain a deeper appreciation of what they went through and how much labor was required for their existence.  My co-worker pondered, “Were they happier back then? Despite the harder physical life?”  I think he concluded that they were.
at 3:27 PM