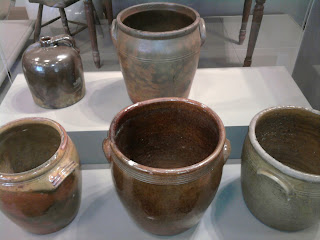 I recently went to the LDS Church History Musuem in Salt Lake.  There is a new exhibit on pottery.  I'll have to tell you, it was not what I was expecting.  I was also VERY lucky to be there while they were setting it up b/c I was able to talk to the professor who was in charge of the exhibit and ask him a bunch of questions.
What drew my attention was a poster that said that the art of pottery for food storage was quickly becoming a lost art.  The food storage stuck out to me and grabbed my attention.
Apparently, once a glaze is put on the pots, they become air and water tight- just like glass.  The method to seal the opening was to melt wax over the food to seal it.  Other methods included storing meat packed in lard, which did not require the wax.  Once sealed, they would put fabric over the top and tie it off to help keep out the bugs.
An average family would have 50+ large pots and jars to preserve their food for the winter.  Without the food storage, they would starve.
Obviously, the pioneers could not transport these heavy clay pots across the plains, they made them after they settled.  In fact, potters were among the most important craftsmen in the community- next to blacksmiths, and wood workers.
Back in the 1800s, the method for creating the glaze was to make a lead-based glaze.  This method is not approved for food storage today- due to the lead content and FDA safety...  but, learning this method might prove very important in some future day.
Now, I've got a bizillion plastic buckets and a hundred or so mason jars.  I'm hoping that I'll never have to make my storage containers out of clay, but its a skill possibly worth looking into.  There's the clay collection, cleaning, mixing, the shaping, the drying and firing, the glazing and firing again.  Not an easy process, but one that served humanity for thousands of years.  I suspect this is not a skill we want to lose.
I looked at local colleges and community courses for pottery and it is all quite expensive.  Additionally, they don't use the traditional methods that I would be interested in, though I'm sure some of the techniques would carry over.  The kiln for the firing appears to be the most difficult to create and not a task completed in one day.  The kiln has to reach very hot temps, much hotter than a typical food oven.  Then, I still haven't found the recipe online for traditional lead-based glazes (If anyone finds one, let me know).

Anyhow, this piqued my interest and thought I would share my observations.
at 8:06 PM

Lead based glazes were abandoned early on because of lead poisoning. Try a slip glaze, an alkaline glaze or a salt glaze. You'll live longer.