Long time no write.  In case anyone was wondering, I'm still alive and kicking.  Enjoyed ourselves over Christmas and am back to the daily grind of life.

During the break, I had a chance to shoot a number of different firearms.  From several models of Glocks, to a revolver, to an AR-15 to an AK-47.  Despite all the fun I had doing that, I'd have to say that the most fun I had on vacation was shooting my nephew's Air Soft gun during a neighborhood grudge match of capture the flag.  He has a higher powered (400fps) AK look a like with full auto.  Man that is some fun- and good training.

So, anyhow it got me thinking about noise and of course, air guns are much more quiet- quiet enough to have a full on war in the neighborhood park without drawing anyone's attention.

The advantage of quietness, means I can practice shooting and using a scope in my back yard without alerting all the neighbors.

This can have advantage's in a less than total collapse situation.  For instance, you could hunt small game like rabbits, squirrels, and birds from a suburban back yard without having anyone be the wiser.

In a total SHTF situation, the air gun could be used for similar purposes when trying to conserve ammo, or don't want the entire surrounding population to know that you a) have a firearm and b)have fresh meat.  You would, of course need to carry a primary battle rifle in that situation- but the air rifle can help you stay hidden and undetected.

Additionally, if the government decides to confiscate all firearms, I may be able to hold onto this one- and use it undetected! 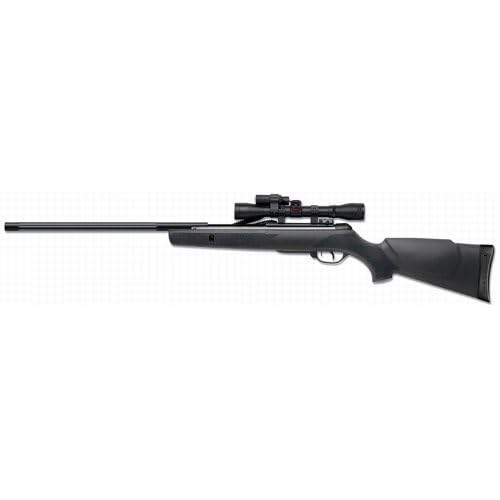 So, after considering the utility of a high powered air rifle in various situations, I've decided to add one to my inventory.  I am considering a Gamo Varmint Hunter.  Does anyone own one?  I've read good reviews and the price is about $200.  That's the most I want to pay for an air rifle.

I've got an RWS/Diana air rifle. It is a single stroke spring piston rifle. The velocity is rated at over 1000fps, maybe 1100. The velocity depends a lot on the type of pellet.

It is loud. Not loud like a .22 but loud enough that if you live in the suburbs people around you will hear it if they are outside and they may hear it if you they are inside, especially if they are suspicious for some reason and are listening for it.

I know one guy that uses one to take out some of the squirrels that eat his pecans in town. he leaves the door to his shop open a crack and keeps the muzzle inside to reduce the noise.

Some air rifles come with suppressors on them and I think you can buy them aftermarket as well. There is no paperwork on a suppressor for an air rifle.

My advice is to get a fixed barrel spring piston rifle. The break open hinged barrel guns are easier to load but my opinion is that they will loosen up over time and use and their accuracy will be reduced. That is much debated and I'm no expert on it.

Get a scope designed and intended for use on spring piston rifles. Standard firearms scopes will often fail in short order because the recoil from spring piston guns is different.

They are fun. I use mine to take out lots of grackles each year. The little pests like to eat my dogs food. One wouldn't eat much but each year I take out a dozen or more and that adds up.

Thanks for the comment. I stopped by Dick's last night and hefted the Gamo Whisper. That one has a suppressor built in. I read up on it, and apparently it is up to 50% quieter to bystanders.

What kind of spring piston rifle do you recommend? Do you like your RWS/Diana? I'm in the $200 or less range.

I like the Diana. There are two main downsides to it.

1. I already mentioned that a fixed barrel gun is not at easy to load as a break open. I have fairly long and thin fingers so it isn't a big deal to me but if you have short thick fingers it might be a bigger issue.

2. It didn't come with sling swivels on it. I don't know if that is common for air rifles or not. I need to add some. I haven't yet because I usually use it near the house. It can sit in the corner and if I see something close by that needs attention I pick it up. Whether I'm successful or not I'm not carrying it around a lot, but I should add them.

I really don't know enough about air rifles to recommend one except to say that I like mine. I will get the model number off it if you like. I think that like with firearms any good name brand would be fine. In a suburban or urban area I would probably get one with a suppressor.

The one I have was on sale from Cabela's for under $200 with a fixed 4x scope.

An airgun would be a good addition, I have one, but not for inner city. That is still a bad place to be.
But take it with you out of town, as you said, a quiet small game gun. Also good for obtaining meat for fish bait.
But use a .22, far more impact than a .177. Good face shots with a .22 airgun will make them keep their heads down!
Le Loup.

I'd consider a .22 cal air pistol, or a crossbow - handheld, or sling shot. The .177 is really small for hunting and I've read, in humane - It said that the pellet couldn't transfer enough energy and that high velocity 1100 fps, could actually blow a hole right through the critter, without killing it quickly - they said that was extreamly painful? I don't know. I've killed with my .177 as a kid, and I think it was quick, but don't actually recall, and that was "just shootin" so I don't know, I didn't "hunt" with a .177, used a 20gauge mostly - for small game. But, again, try a sling-shot or blow gun. You can buy a silencer (in WA State), but they're "illegal" to hunt with.

If you think a .177 air rifle is inhumane, don't even think about an air PISTOL! Pistols can deliver only a fraction of the energy of an air rifle. The best pistol is only about 400fps.

Yes, a .177 will blow a hole through the critter, that's why head shots are best. For me the .22 is the best choice though. More energy delivered to the critter, and it leaves a bigger hole.

In competition, they must use a .177 due to the rules and the advantage of shooting through the hole in the target. And because .177 is the only gun allowed in competitions, the high-end .177s out perform the .22s. But in the 100-400 dollar range the .22 should be just as accurate as the .177. Also, the pellets actually LOSE accuracy as they approach the speed of sound. So, depending on your altitude (in relation to sea level) you might be best to go no more than 1000fps!

Jimmy The Screwdriver QUOTE:
Yes, a .177 will blow a hole through the critter, that's why head shots are best. For me the .22 is the best choice though. More energy delivered to the critter, and it leaves a bigger hole.

I have to agree with Jimmy on this one. I started out as a kid with a 177 and did make clean kills, but also some that were not.
I switched to a .22 and still have it. As Jimmy sais, more energy, the bigger slug hits harder.
I would love to get a round ball mould for the .22 one day and see how it performs.
Le Loup.

Ah come on Jimmy, I can't be that bad! Here are some air/wind guns that I recon you would like. See them at:
http://woodsrunnersdiary.blogspot.com/search?q=air+guns